Television. Once it was the drug of the nation. Now its more of a light swig of Tixylix when you're at a loss what else to do. Thats not to say that people ogling the box has completely died out - I mean, just recently 172 million people watched the finale of BBC One's "The Bodyguard". I didn't see it myself but am assuming it is some sort of "Minder" remake - but with so much choice these days and almost as many devices to try it feels like regular ol' telly as an all powerful force has become a thing of the past.

With streaming and any time viewing, the communal sense of sharing a conversation about the programme you're currently obsessing over is lost. Why bother ringing around all the shows in the listings guide you want to - nay, HAVE TO - watch when there's iPlayer, torrents and self-recording boxes that can fit 5,000 episodes of "Coronation Street" on? Thats very nearly a whole week's worth!

I myself am no different to the herd. When I was a kid I would salivate at hearing of the future with its thousands of TV stations and on demand telly, yet now i'm in the future, can typically spend hours flipping round my NOW package unable to find anything to actually watch. I found episodes of "Highway To Heaven", "Heartbeat", "Walker Texas Ranger", "Soldier Soldier" , "The Love Boat" and even "Mannix", none of which I even wanted to see the first time round, whilst ITV3 are still coughing up "On The Buses" showings - a series that is less a comedy and more "Exhibit A" in an age where we've decided physically repellent bus drivers attacking women is a bad thing. All of these shows could be considered to be "the wrong sort of nostalgia" - the big hitters from their respective decades, rather than the more interesting, more perochial, more plain baffling things that have sent generations of middle aged folk to the wonderful likes of TV Cream, Tim Worthington's blog and Transdiffusion, to attach reality to half-remembered television fever dreams.

I have long had an affinity for the forgotten and forgone and have spent more than a respectable time drooling over television of the past and, in particular, the long left behind listings. With these, we can build an instant time machine back to a specific era and stretch out an arm to the past. Its also quite nice to see a schedule not quite so obsessed with cookery and celebrities doing things they did not become celebrities for doing, be it on ice, in the jungle or dragging domestic violence back twenty years. It feels like the only time we really let ourselves get excited for the upcoming TV and get out the discarded red pen to mark out our favourites in the telly magazine now is Christmas. And so to celebrate that, I wrote a book... 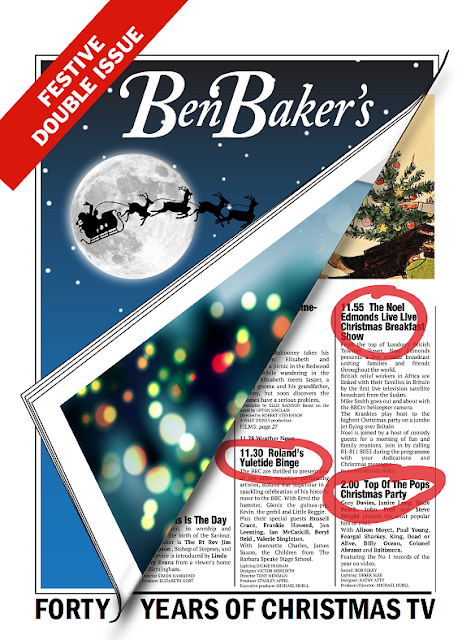 "Festive Double Issue: Forty Years Of Christmas TV" (buy it here) is my love letter to the telly of the past and pays tribute to forty years of festive programmes with over 250 viewed and reviewed in mini-essays. Its a great not-in-the-shops book for the telly addict in everyone's life, especially if thats you and one I'm incredibly proud of.

But why stop at Christmas? Why cant we have a trip back through time to the schedules of old all year round? And that, in a convoluted and deeply self-promotional way, is how I came to launch "Looking Back On Today" which I'll regularly update with posts and podcasts digging through six decades of the idiot's lantern for shows good and bad but also the lost, the obsolete and the plain bloody weird. It's going to be a lot of fun.

But now we end our broadcast day. Until tomorrow's yesterday today, goodnight.