I've Got It. We Can Retitle The Repeats.

Christmas shopping isn't fun at the best of times and the late night Thursday opening, whilst initially seeming quite useful, quickly turns into a bustling pit of gormless and increasingly panicked festive purchasers. Not great for a claustrophobic, bookish eight year old scared of his own shadow who couldn't even buy anything if he wanted to. And yet that’s exactly the position I found myself on the 30th of November, 1989. But first, here's the charts...

...looks good, shame I missed it. I was getting kind of into pop quite a bit by that point but my true love was comedy. Looking at the TV schedule for that night, I would have been eager to get home for "Blankety Blank" and Victoria Wood's series of one-off playlets on BBC One, I might even sneak a look at "Smith and Jones" at half nine on the same channel. Over on ITV, I would've been happy to miss a 7pm showing of "After Henry" whilst on Channel 4 there was repeat of the historical big business sitcom "Brass" although I didn't understand a word of it and they didn't even have a laugh track to tell you when to join in! And as for these laffs... 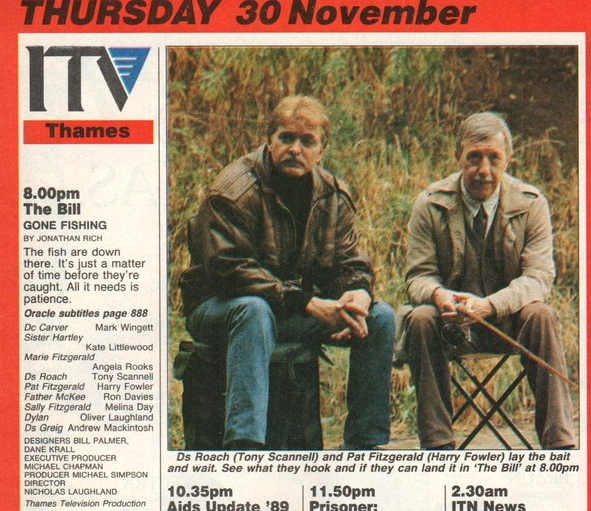 Despite looking like a rather unexciting evening's entertainment, both in the real world and on the small screen, Thursday November 30th 1989 was still one of the most exciting dates burnt into my pint-sized brain. But why? Well, - even though today is the official 49th anniversary of its launch - that for me was the start of "Monty Python's Flying Circus".

I have a vivid recollection of getting in and being allowed to watch my little portable black and white telly for half an hour in bed. It was a perfectly normal event for me by then as I'd long been obsessed with comedy and 9pm on BBC Two really was the place to go for it. This would've been its fourth or fifth run out in some form or other - the 1987 repeats had been slightly too early for me - or too late, being as they aired well after my bedtime. But now I was here and the first episode I saw was the episode one of series one ('Whither Canada?') to boot! A few minutes of dead pigs, Wolfgang Amadeus Mozart and Italian language lessons in, my mum came to kiss me goodnight. Bewildered by what I was seeing, I can recall asking her if I'd like this series. As I say, I was a nervy child and the alternative 80's comedy shows were frequently full of violence and grue so I felt it best to check. She said she didn't know but that it was very silly. I decided to stick it out and over the coming weeks was rewarded with something that looked on the surface like the more traditional comedy I knew such as the Two Ronnies and yet genuinely felt like nothing I'd seen before. To say it changed my life borders on typical hyperbole but its probably not far from the truth. I just couldn't stop thinking about it.

The repeats were to celebrate the twentieth anniversary of Python's first broadcast on the 5th October 1969 and in true BBC fashion they missed the date entirely, catching up on 18th November with the new compilation "Parrot Sketch Not Included" on BBC One. After which there was a two week wait for more new oldness.

Whether the Beeb held back because of the appallingly coincidental death of Graham Chapman, just one day before the twentieth anniversary is a nice thought but unlikely. By the time the 25th anniversary came round the BBC weren't holding back, starting their big repeat run in July and even showing rare as hen's teeth special "Monty Python's Fliegender Zirkus". As for me, I was lapping it all up as a fully confirmed Python obsessive. I excitedly borrowed the WH Smith box set of series two from my uncle and watched it endlessly. Then there were the films, the books and with "Always Look On The Bright Side Of Life" suddenly charting, almost as if it was aware I'd just become a fan, the brilliant records. And the computer game for the Amiga (which you can read more about here)! I'd even watch Flying Circus repeats on German satellite TV, in English with subtitles, which made a strange series, even more unusual.