Looking Back At 31st October

"A Screen One Special drama for Hallowe'en by Stephen Volk, starring Michael Parkinson, Sarah Greene, Mike Smith, Craig Charles. Ghosts no longer inhabit stately homes and rattle chains. They live in ordinary council houses like that of Mrs Pamela Early. For months she's suffered strange noises, awful smells and bent cutlery, but is hers really the most haunted house in Britain? BBCtv turns the cameras on ghoulies, ghosties and things that go bump in the night."

This week, the dark anthology series "Inside No. 9" more or less pulled off a creepy live special that went deliberately wrong, causing the deaths of its stars and showing images that were never meant to be seen. For viewers over a certain age, there was only one programme they could compare it to. But today's subject wasn't a cult comedy tucked away on BBC2, this had over 11 million viewers thrilled, perplexed, terrified and entertained by a piece of fiction airing prime time Saturday night on BBC One. To put those numbers in perspective for 1992 that was slightly less than were watching that week’s oddly forgotten old folks home sitcom “Waiting For God” but thankfully more than Jim Davidson's “Big Break”.

A one-off play airing under the regular “Screen One” banner, "Ghostwatch" took advantage of its Halloween night scheduling with an alleged live broadcast investigating a haunted house going hideously wrong as the spirit of “Pipes” slowly infected the programme, initially in “blink and you’ll miss it” cameos, before stepping up to causing the off-screen disappearance of reporter Sarah Greene as Craig Charles and her real life husband Mike Smith look on in horror. It ends with Pipes eventually possessing the host Michael Parkinson who intones “ROUND AND ROUND THE GARDEN LIKE A TEDDY BEAR” as the studio collapses around him. Cats yowl. The screen cuts out. The full cast list is scrolled. Continuity continues. BBC One move on to “Match of the Day”. The nation tries to go to sleep*. 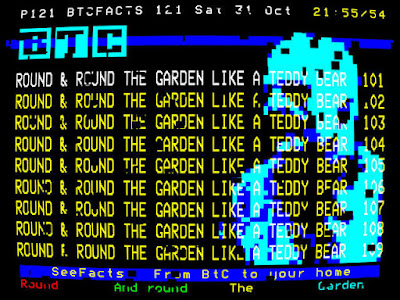 Despite this blatant staging, Radio Times listing containing the full cast and outright explanation it was merely a fictional play, “Ghostwatch” showed the power of television on people of all types – some scoffed at the ridiculousness, some were deeply disturbed and many rang into the BBC and the Duty Log to lodge either complaints or check if this thing they were seeing was in anyway possibly real. With no Twitter or Facebook to back up and debunk, it’s understandable how deeply the show affected people. The simple power of television. 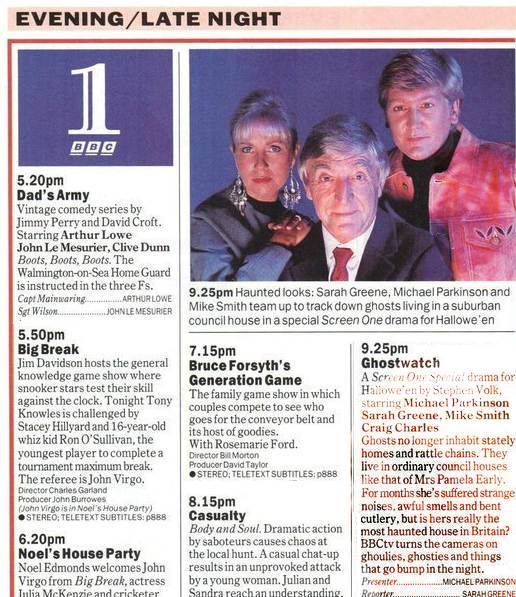 As for me, I was watching it alone aged 12 and more than a little freaked out. We didn’t buy the Radio Times so the comforting brace of a cast list wasn’t there to check but I had definitely seen the “Screen One” introduction at the start so in the back of my mind knew it had to be fiction. …right? I wasnt scared but just to give the other channels a chance I occasionally flicked to a different show for a bit of respite - probably not ITV as they were showing "Wall Street" whilst Channel 4 had the uninspiring double bill of "Court TV" and racing highlights but possibly "Monty Python's Flying Circus" repeats on one of the German satellite channels which can be just as creepy in its own way - before heading back for the latest bit of Pipes-mania.


And now you can too!

Looking back, its easy to grin at the acting, graphics or staged feel but, over 25 years later, we're still talking about it and no doubt will for a long time to come. Your move "Inside No.9"....

*Unless they turned over to BBC Two who were showing an entire theme night through until morning under the title “The Vault of Horror” hosted by the erudite and charming “Dr Walpurgis” (created by genre aficionado and author Kim Newman and played actor Guy Henry under an extremely well done rubber mask) and featuring the TV premiere of the quite good “Creepshow”, Hammer’s “The Curse of the Werewolf”, 1935 classic “The Bride of Frankenstein”, hoary 70s cannibals-on-the-London-Underground-spectacular “Death Line” and, in the “shit kids might be up early now watching” slot at 6:10am “Abbot and Costello Meet Frankenstein”. More excitingly for horror fans were new featurettes on Dario Argento, The Evil Dead series, make up legend Tom Savini, EC Comics’ horror titles and much more. The slot was so popular that was used for late night scary movie sections over on BBC One on 1993, 1994 and 1996 with Guy Henry now appearing as simply as the increasingly daft “Dr Terror”.


Teletext image taken from the brilliant Ghostwatch: Behind The Curtains blog. The original version of this text appeared in my book "Kill Your Television" available here.
at October 31, 2018

Email ThisBlogThis!Share to TwitterShare to FacebookShare to Pinterest
Labels: bbc one, ghost, ghostwatch, halloween, inside no 9, mr pipes, parkinson