Looking Back On 1st October

Time for a TV time warp through six decades of television past, from the magnificent to the frankly confounding. Today there's room for dodgy deals, punk children's sketch shows, a chat about Yerp, dancing bears, Nessie-hunting, obscure Australians and moonlighting DJs but first, some bloody CULTURE..

In 1959 there were two notable productions of "Othello" with the first being a tour de force starring role for the legendary Paul Robeson in his final stage appearance, as Othello for the Royal Shakespeare Company in Stratford. The other was Verdi's musical version of the same tale "Otello" which had recently been recorded by NHK Symphony Orchestra in Tokyo. This, however, appears to be neither of those, but being as listed star Charles Holland was a professional opera singist, we can assume it was probably a version of the all musical version with the singing and that. Okay, I might not have much to say about proper arts programming but the idea of this being in the same slot that now is home to "DIY SOS", "Do A Baking, Mate" and "Christ Is Eastenders Still On?" is worth noting upon.

Meanwhile over on the commercial channel, Granada were showing "floodlit football" highlights of  Man Utd vs Real Madrid in a friendly which the foreign lot won 6-1. The matches were the Spanish side's way of helping out after the horrific Munich air disaster had resulted in the deaths of many Manchester players and staff. The following month a rematch was held with United still losing but this time 6-5 providing some much needed optimism to the city. 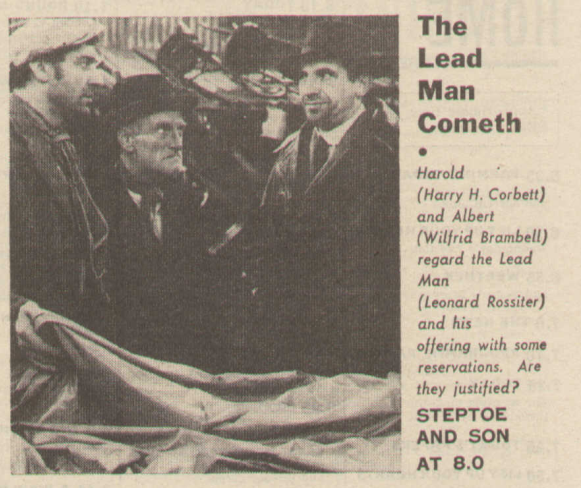 Answer: Probably, yes because he is dressed as the Gestapo bloke from Indiana Jones. And also he is the bloke from "Tripper's Day". Hope this helps! 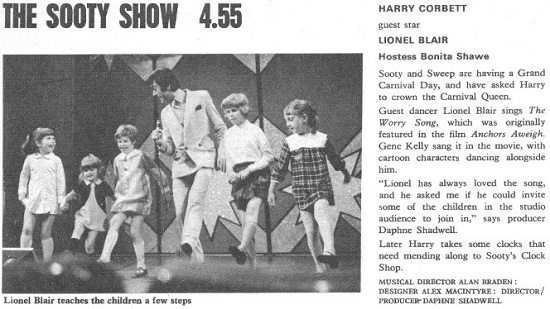 Yes, because Sooty was always known for his elaborate dance moves, wasn't he? And as for the "clock shop" business, if it ends with the punchline "well stick two hands and a face on that" immediately call the Police.

"The motion: That Britain should now join the EU Common Market. Leading the case in favour: Rt Hon Christopher Chataway, David Steel MP. Leading the case against: Rt Hon Barbara Castle
In the chair Robin Day.  In studios around the country a selected audience of over 1,000 people chosen as a sample of the British Public. A computer will process the answers and the result of the Great Debate will be announced."

Ooh christ, I didn't expect the blog to get so blisteringly topical so quickly. Its always worth looking at how much went into getting Britain into the EU back in the early seventies now we're facing down the barrel of exiting. And yes, it was largely about brown people then too. I wont spoil how this original debate ended but thankfully for those who wanted to avoid international incidents, offending races and lies told on a massive scale, over on BBC2 at the same time was...

"The Goodies save a suicidal zoo-keeper and meet a canny Scot." 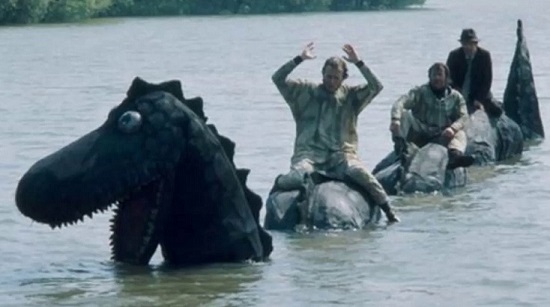 After an unsure but unquestionably unique first series, "The Goodies" returned to BBC Two just ten months after their last run ended - and five weeks since BBC One had finished repeating those - with an episode full of playful if slightly overcooked Scottish stereotypes helped along nicely by star turns from Bernard Bresslaw and Stanley Baxter. It's not the greatest episode of the second series (Although not the worst as "London to Brighton" and "The Lost Tribe" attest) but with the likes of "Come Dancing", "Gender Education" and that one with the cat coming up, its a colourful introduction to a series deservedly on the rise.

With Network releasing the complete BBC shows, just last week as I write this, there's been a lot of new analysis and looking back over the trio's output which unquestionably wavers (I say this with some confidence having watched six discs of it over the past five days) from great to dated, leading to berks with websites to fill smashing their faces against the keyboard to create 'articles' about The Goodies being offensive, but the imagination and scope of the series always wins out and it definitely helps to see them flowing in the context of the time when coming across a more problematic episode. Personally, I think the programme's issue is less race or homophobia - although both rear their heads in a earnestly right on but now cringeworthy way - but the sheer amount of "phwoar"ing at nude tits, which are in abundance. It's this reason I haven't tried to show it to my own kids yet but selectively choosing, I reckon they'd get just as much fun out of Kitten Kong, the joyful final ten minutes of "The Movies" or a giant goggle-eyed Loch Ness Monster being ridden into Cricklewood as millions before did. 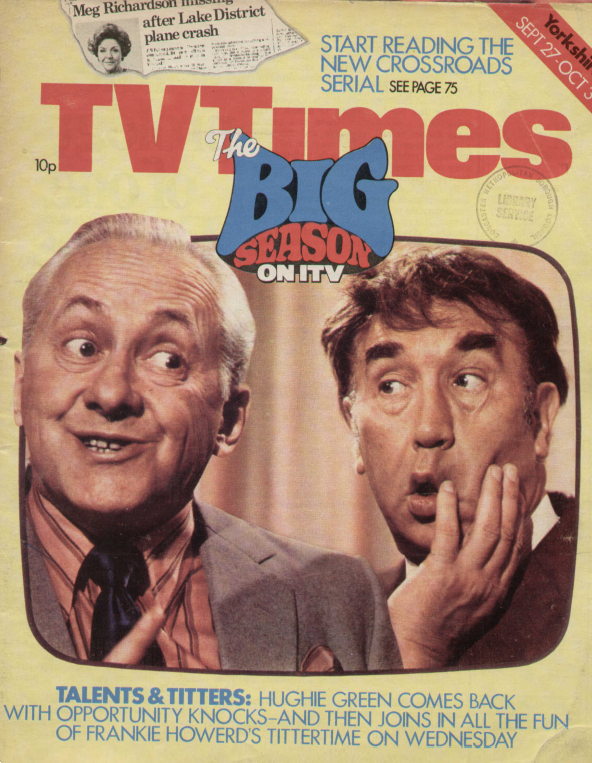 "Frankie Howerd takes to the screen for an hour of Tittertime. You see, Francis loves titters — big ones, little ones, titters of every kind. In fact when it comes to knowing what he likes, he’s definitely a titter-man.And now folks give a special welcome for little Hughie Green for whom opportunity knocks when he joins Francis in a reconstruction of that famous movie The Night of the Generals ... and with Frankie Howerd in the lead it promises to be quite a night for those generals"

A one off special for the man who ebbed in and out of fashion like a yo-yo tied to a speedboat. 1975 had already seen Francis appear in "Further Up Pompeii", a needless revival of a sitcom that had only ended in 1970 whilst he'd end the year with another special "A Touch Of The Casanovas" which was quickly and correctly forgotten about. This sketch show was more standard third channel variety fare although with a script from three of telly's best - Barry Cryer, Ray Galton and Alan Simpson. Other ITV "Big Season" marked shows include the return of Titterguest Hughie Green's "Opportunity Knocks" (Mondays, 6:45pm) Lyn Marshall's "Wake Up To Yoga" (Sundays, 11am), a documentary about mining deaths and the premiere of Beryl Reid-starring lesbian nun acting extravaganza "The Killing Of Sister George". Titter ye etc. 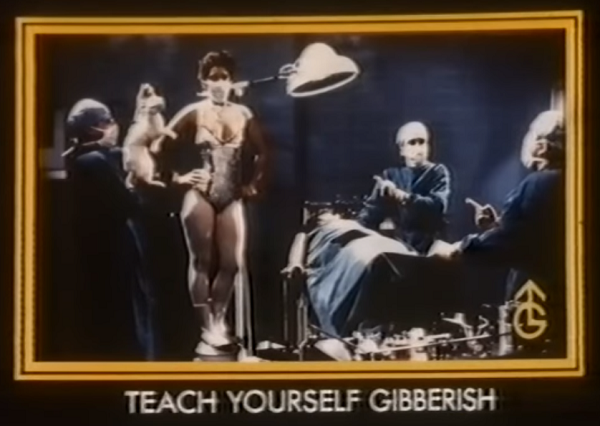 "Join the Berts at an Art Gallery of paintings and rubbish/stlll life offering hope for for the universe … enjoy the Berlin Catatonic Orchestra conducted by Reginald Drain (Bruce Mitchell) and go to the Oscars - will the winner by Clark Kent or JP Scott … and CP Lee delivers an Art prize load of artists to a puzzled housewife (John Bramwell)."

From one type of comedy extreme to whatever it was Alberto Y Lost Trios Paranoias fancied chucking at the viewers in this Granada-produced series that seemlessly packaged a comedy music act with a 1979 single called "Fuck You" and another EP about punks topping themselves in order to create "Snuff Rock" into people's homes as a teatime sketch show without losing much of their edge. Each episode would take a letter and use that as the theme for the episode including F for Fantasy, M for Mystery, P for Pop, E for Explorers and K for Lying. This was episode three - A for Arts - and features a genuinely spiky set of comedy pieces that feature a presenter accidentally garroting a guest, two aliens investigating what "the homos" think of art, a housewife receiving a van load of classic painters due to a misunderstanding, an episode of Leonardo Da Vinci's sitcom, a sensationalist advert for the Oxford English Dictionary, bandwagon-jumping exploitation flick "Disco Werewolf" and a closing joke about the whole programme being "a pain in the arts" that I suspect made a few unsuspecting grannies choke on their crumpets.

Their punk stage show background means the Albertos rarely aim at a child audience despite its 5:15pm listing and there's a lot of "Monty Python's Flying Circus" in its bloodstream. It could even be said to be a spiritual sprog of the Python-precursor "Do Not Adjust Your Set" with its breaking on and out of sketches, surreal oddness and musical numbers running throughout, as if the Bonzos had been allowed to break out of their guests slot and run the whole show. Sadly the band were no more by the end of 1982 and "Teach Yourself Gibberish" has fallen down nostalgia's sideboards and dying for a rediscovery soon.

"The ebullient former Radio 1 DJ returns to television this evening with the first in a series of wacky entertainment shows. This week's celebrity guests include East 17 and Cyndi Lauper."

Christ, how soon we forget. One of two series of this second vehicle attempting to make Steve Wright a TV star after odd panel show "Home Truths" earlier in 1994. It's unsurprisingly rather dependent on whether you could stand Wright and his increasingly tired schtick which, like many British presenters of the time were guilty of doing, feels like a retread of old David Letterman ideas. This is doubly ironic as later in the same day's schedule Wright's uneasy Radio 1 contemporary Danny Baker was putting his own spin on old Letterman bits in the late night chat show "Danny Baker After All". Sadly I don't have this episode of the "People Show" (ugh, just he title sticks in your throat like a obsequious frog) but the following week saw two much more reliable comedy favourites appear to promote their new live video and generally get a feel for not being very successful on Saturday nights...

"As it is Friday the 13th, the pair try to scare themselves by hiring a horror video."

And finally, a bit of a sadly forgotten Australian silliness which fits perfectly in the same world as Vic and Bob or The Goodies - indeed two episodes were directed by legendary British comedy person Bob Spiers who had worked with Oddie and pals on their later shows. This was a bit of a delayed broadcast for Colin Lane and Frank Woodley's 1997 comedy which the BBC seemed to struggle with scheduling, despite the duo winning the Perrier Award in 1994 beating such nobodies as Alan Davies, Jeff Green, Harry Hill and Al Murray. There was a short pause after series one went out in this late slot after which the second series was bumped to the slightly earlier time of...11am on a Sunday morning. The pair eventually split in 2006 but excitingly have just announced a reunion tour for Australia which should hopefully raise the profile of this brilliant but battered series.

And if you liked all this, consider supporting the site and buy a book? Thank you.