Looking Back On 4th October

All the Slades in today's installment of the blog but first up, an unsteady Marxman...

In 1959, it had been ten long years since the Marx Brothers last headlining film, the god awful "Love Happy", which had been meant for just Harpo before a heavily in-debt Chico was stuck in alongside an uneasy Groucho. Ten years later, things were clearly not much better as this wobbly but amazingly still-existing appearance on the BBC's popular variety show, just two years before his death in October 1961 aged 74, shows. Who knew that Chico needed the money...?

10.15pm: The Strange World Of Gurney Slade (most ITV regions)

One of the most original, unusual and fascinating sitcoms ever made, Gurney Slade, played by Anthony Newley (you know, from the Garbage Pail Kids Movie), is the bored star of a sitcom who decides in episode one to walk out and find something better to do. Viewers, used to Newley's light pop career and more traditional variety turns, had been thrown in 1960 by this surreal, droll comedy which was moved from half 8 to half 11 after two episodes aired so its a surprise to see this repeat run crop up in 1963 although Newley having co-written (with Leslie Bricusse) the Broadway hit "Stop The World - I Want To Get Off" might have helped. The same month also saw Newley return to the chart with the hit comedy album "Fool Britannia" recorded with Peter Sellers and his then-wife Joan Collins sending up the extremely topical Profumo Affair. [Listen to it on Spotify here.]

This was episode five which features Gurney reading a lengthy folk tale to a group of chidlren before they're intruded upon by a worse-for-wear Bernie Winters being propositioned by Maureen Connell. Its probably the dullest of six truly magnificent half hours and still ends with a battle inside Gurney's mind with a magical tinker and an evil version of himself. Whether the three years had given viewers chance to catch up to Slade and Newley is unsure but its a huge stepping stone to the works of Cook and Moore, Python and lots of quirky British comedies that followed, not to mention some bloke called Bowie... 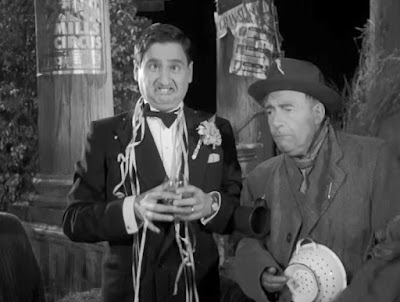 "An extra special edition of Top of the Pops to celebrate its 500th birthday featuring this week's chart successes and surprise guest appearances from the international world of pop."

Nine and a bit years after launching, The Toppermost Of The Poppermost reaches a very important milestone. And no, of course you cant watch it because its presented by that horrible old fucker. Pause for a joke about Noel Edmonds. Sadly, the cigar chomping, fright-wigged Fix It pederast is all over the episode so its perhaps a mercy that most of it seems to be lost, although some section remain in black and white such as this Who appearance. A few of the inserts have made it to YouTube though including this message from Slade (not Gurney) who were in the middle of a US tour trying in vain to convince the Americans that they shouldn't wait until 1983 for "Cum On Feel The Noize" to be a hit.

Interesting to note the band singing Happy Birthday to the tune of "We Wish You A Merry Christmas" and saying they'll be back soon as one of the tracks recorded during that American trip would be released in December and become somewhat associated with the festive season... 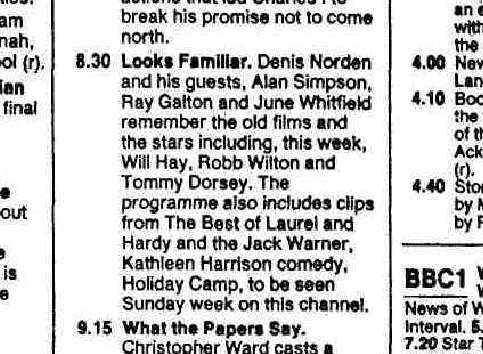 A smashing line up for a showing of Denis Norden's gentle "Do you remember things?" panel game. When Denis died earlier this year there was a wonderful outpouring of genuine warmth of the sort he himself encapsulated as the host of programmes like these. "Looks Familiar" had been a long running series for Thames TV before ITV decided that some old people talking about some old things wasn't for them anymore, at which point dynamic young upstarts Channel 4 said "Oh we'll have it then!" And thus it continued until 1987 there.

And if you'd like to hear myself and Tim Worthington talking about the series in a bit more detail, click below for a podcast extra...


If you like it, give the podcast a subscribe as its great fun and I always enjoy being a guest on it. Likewise, if you enjoy these look backs at TV of old, you will definitely enjoy my book "Festive Double Issue - Forty Years Of Christmas TV" which features over 250 entries in the same style and is packed with telly memories, good, bad and bewildering. It's a perfect 'not available in the shops' for the telly addict in your life and out now...