Run The Jools: Who Was On The First Later?

"23.15: The Late Show: Later
A new weekly music series presented by Jools Holland , including two guest bands plus an additional acoustic set. Producer Mark Cooper says Later will provide an eclectic mix of artists: "It is not intended to be rock- or chart-orientated, although we do hope to feature some mainstream artists."
● STEREO"

And thus, 26 years ago and two and a bit hours after the "Culture" episode of "Bottom", one of the longest running British programmes quietly launched to a stream of "Isn't Naked City on?", "he was better in Squeeze" and "was that Rowland Rivron?" "Later....With Jools Holland" came into being as a spin-off from BBC2's much missed arts strand "The Late Show" with a simple "bands in a room playing music" format which as we can see from episode one onwards hasnt changed very much at all.

The Christians there, flogging their third album "Happy As Hell" which had just charted at a less-than-spectacular No.18 after a No.1 and No.2 in 1988 and 1990 respectively. Yet in terms of success when compared to the other three acts featured on the first episode of "Later...", they were unquestionably the headline band. Next would probably be The Neville Brothers - sadly not the football ones - but an American soul / funk collective of four - yes! - brothers named Art, Charles, Aaron and Cyril who had a minor UK hit in late 1989 "With God On Our Side". Their sixth record "Family Groove" had been released the Monday of this edition to very little interest indeed. Whether thats because the lead single was the most 1992 sounding cover of Steve Miller's MOR stodge classic "Fly Like An Eagle" featuring Steve Miller himself on guitar is hard to call. It failed to chart.

Whether they were pissed off when Seal had a very similar sounding hit with it five years later as part of the "Space Jam" soundtrack is unrecorded. Athough frankly it had been better if none of these versions had been recorded in the first place. Sorry, its easy to sneer I appreciate from my comfy armchair in 2018 with all the exciting chart music like...um...thingy with the hat and the lass with...the...eyes? Back in 1992, it would unquestiionably have been a pleasant opportunity to see some lesser known musical acts that were not being forced to sing tunelessly in front of Tony Dortie. Like Nu Colours...

Another one of those "I'm sure I remember that!" dance pop sounds from the time although they again wouldn't see much success in the charts, peaking at No.31 in 1996. Its a shame because the harmonies are really impressive and belie the gospel sound they initially identified with. Their separate vocals would eventually find their ways as backing to the likes of Robbie Williams, Lighthouse Family, Lulu, Squeeze, Paloma Faith, M People, Tin Tin Out and...oh, The Christians' "Happy As Hell". And finishing up this premiere edition of Jools' grooving organ were D'Influence, another act that would come to be better known for their songwriting and remixes. Here's them on this very show. along with some now trademark suitably awkward banter around the piano with Jools...


It was a slow start but considering the early days and later slot, its still a solid vehicle for live music which gives a window to a lot more urban, soul and RnB music than we perhaps collectively remember between the guitar spankers. Whether you would tune in and assume it'd be midway through its 53rd series in 2018 is doubtful but the fairly open (i.e. not metal) "if its hip" policy led to some of the biggest, best and plain strangest lineups of musical turns squished together on the box. Future series one editions would feature such awkward bedfellows as Denim and En Vogue, Sonic Youth and Shabba Ranks and everyone's favourite lousy bastard Morrissey on an episode with obvious pals Matthew Sweet, Tori Amos and Chris Rea.

As for me, I love "Later...With Jools Holland", I just wish it was on at a earlier time. With a different presenter. And less music... 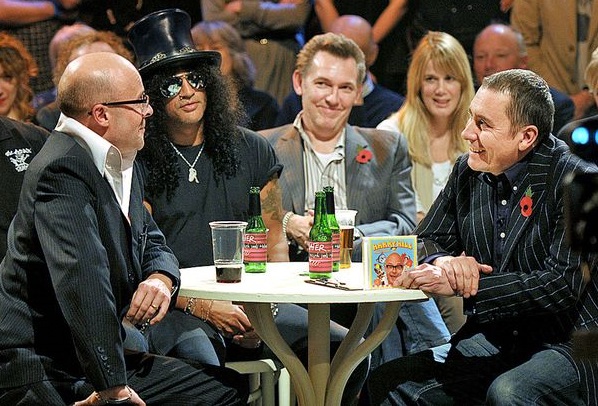 Email ThisBlogThis!Share to TwitterShare to FacebookShare to Pinterest
Labels: BBC2, D'Influence, Fly Like An Eagle, Later With Jools Holland, Nu Colours, The Christians, The Neville Brothers