A Christmas Day In The Life: Part Three

In my book, “Festive Double Issue: Forty Years of Christmas TV” (available for Kindle here), I cover the two week festive and New Year period with everything from the obvious to the baffling and all the hapless holidaymakers in between. But what would make up my own perfect Christmas Day line-up? Well, its comedy. Lots and lots of comedy. 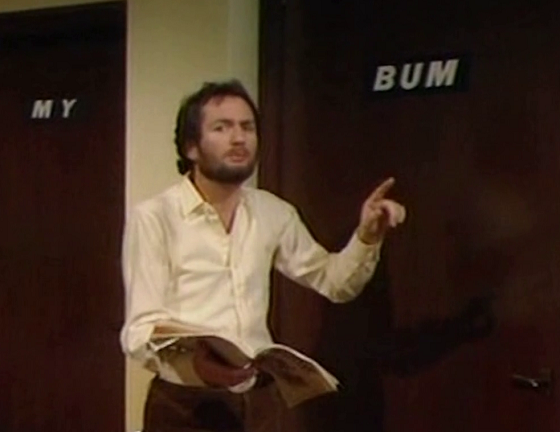 “This is Kenny Everett’s first show for the BBC and in it he will be doing several things we’re not allowed to talk about and meeting several people we’re not at liberty to divulge. Suffice it to say, everything will be completely original in as much as it’s never been done before... on the BBC. Join Kenny and the cast of thousands for the experience of a lifetime. Or, on the other hand, watch this show.”

To say that Kenny Everett joining the BBC was something akin to placing a stick of dynamite in a nice vase of petunias wouldn’t be far off the truth. Leaving previous employers Thames after they scheduled him against “Top of the Pops” despite them sharing the exact same audience, Everett’s appearances on Auntie Beeb were perhaps slicker but no less exciting and fully of genuine naughty bits. This first half-hour for the BBC is a perfect calling card beginning with spinning newspapers revealing his defection (“Biggest betrayal since Pearl Harbour!” – Daily Mail, “Who Cares?” – Gay News) followed by some black and white faux-horror movie footage of Ev being bundled out of a car marked “ITV1” and buried in a shallow grave before being dug up again by two BBC chaps in a clapped out Austin. With this, Everett. fired warning shots at both sides AND mocked his own place in the showbusiness world – and all in the first 40 seconds!

Much like his previous Thames shows there are cut-out animations, familiar characters, a set full of television screens and no studio audience yet but bags of confidence from the get go. Plus it’s very, very funny. A memorable running sketch finds Ken wandering the corridors of the much-missed BBC TV Centre explaining what all the initials on the doors mean (“DG: Director General”, “OB OPS: Outside Broadcast Operators”). He then assumes “BUM” must naturally stand for “Broadcasting Under Manager” but is instead, terrifically, a giant bottom which later blasts Terry Wogan through a nearby wall.

There’s also a look at the cobwebbed BBC Boardroom as decrepit old executives try to work out the appeal of Everett, an episode of crass American-style game show called “Shoot The Dog” and guest stars The Police, Billy Connolly and David Frost who crops up to point out a sketch has been ripped off from his own 1960s show “The Frost Report”. Plus the first appearance of the never ashamed US actress Cupid Stunt. And of course it’s all done...

Yes, its a bit of an obvious one as the original broadcast recieved one of the biggest TV audiences ever (just behind the slightly earlier Mike Yarwood, this was originally slotted in at 8:55pm) but it was the first full Morecambe and Wise show I'd seen thanks to a repeat late on Christmas Day 1993. I doubt I knew who any of the newsreaders performing "There Is Nothing Like A Dame" was or what "Starkers and Hutch" was parodying but it didnt matter as it was all in the performances. The end bit where Elton John finds an empty studio and performs his song anyway was weird and a little haunting but really unique and a suitably maudlin exit for the double act who were off to Thames at the end.

“The latest daytime show to be hosted by a popular husband-and-wife team.  There are tips on female problems like seriously split ends…”

There were a lot of jokes made at the expensive of ITV’s weekday magazine show “This Morning” fronted by married couple Richard Madeley and Judy Finnegan since it launched to huge acclaim in 1988, thanks to its rollercoaster mix of light and heavy topics for discussion, but few were as affectionate yet devastating as Victoria Wood’s assassination of the daytime magazine format. Fronted by partners Martin Cumbernauld (Duncan Preston) and Sally Crossthwaite (Wood herself), we find Sally in charge and Martin “with no embarrassment at all” discussing “female problems” like “wonky wombs and faulty fallopian tubes”.  Between the links are several unconnected sketches including regular visits to “The Mall” which did for the BBCs new soap flop “Eldorado” what Wood’s earlier “Acorn Antiques” had for Crossroads with its light inconsequential plots and wooden acting.

There’s also a predictable but fun connection to Wood's earlier work in the final part. The special ends with some new stand-up and new song “Real Life” (“Life is a fan club and I’m not a fan / Life is a bran tub / no prizes / just bran”), later to become the title track of her only studio album in 1997. It’s tempting, watching Wood interview – slash - insult old friend and special guest Alan “'Dickman'” Rickman, to and not feel a bit melancholy at the fact both are no longer with us but when the comedy is this good we’ll always be laughing too much to allow that.

“A Video de Dad. It’s full of lots of things about Christmas. What we did, where we went, what we ate, how much we all drunk and everything. It’s a great stuff! (The turkey, I mean.) But seriously...”

No Christmas period for me is properly started until I’ve seen this spin-off from the later series of “Alas Smith and Jones” which took an affectionate but honest look at British working class families via the new-fangled home camcorder. There’s well-meaning but quick to temper Dad (Jones), happy but put upon Mum (Diane Langton), kids Shirley and Peter (Jenny Jay and Nigel Harman) and their fun, illiterate and frequently drunk lodger Len (Smith) who almost anticipates the character of Homer Simpson. Sequences involving simple acts like putting a wreath on the door, badly stealing a tree and visiting sick relatives are made into painfully funny sequences that are never played cheaply for cringe laughs. Likewise the family are rough but never sneered at by Griff and Robin Driscoll’s script which makes them fully rounded likeable characters and could easily have been spun off into a full series.

"Dawn French and Jennifer Saunders find themselves house-sitting for a rock star over Christmas, during which time they sample some television favourites and offer a new angle on Monarch of the Glen and Tipping the Velvet."

More sketchiness, this time from Christmas Day 2002 and despite featuring several of the parodies as they'd become well known for, this felt like a bit more of the double act returning to their live audience roots as they supposedly house-sit for Richard and Judy for the festive period. The pair are at their most mischievous and wonderful. There's jokes that have been lost to time a little, like Dawn impersonating Carrie Grant from "Fame Academy" and a discussion of Madonna's short-lived stage acting career in "Up For Grabs" but its never really mattered with F&S whether you recognise what is being spoofed as they go at it with such enthusiasm and ridiculousness its hard not to smile. They even mock the fact there's no-one watching as "Celebrity Who Wants to Be a Millionaire?" is on the other side. Good morning.

"Starring The Beatles with Wilfrid Brambell, Norman Rossington , John Junkin. The Beatles' first and best feature film is a way-out journey from Liverpool to London..."

Because you need a good old British film to nod off to at the end of the day and there’s always been something oddly festive about The Beatles to me. It could be their four Christmas number ones or “Magical Mystery Tour” making its TV début on Boxing Day 1967. It might even be their terrific festive fan club discs they made, later being produced by Kenny Everett. "A Hard Day's Night" originally made it to TV on December 28th 1970 and got a few more showings throughout the decade, usually around Crimble before seemingly vanishing from telly for the next two decades. Fifty years on the songs remain great and the Beatles remain irreverent, funny and a genuine surprise as they potter through not much of a plot which is kept moving by the brilliant Richard Lester whose later film "The Bed Sitting Room" was another quirky British cinema favourite I had on the shortlist for this. Fab, Beat and Swingorilliant all round! Also: gears.

And that's it. Thank you all for reading my words or hearing my noises this year and I hope I can do more of it in 2019. Merry Christmas and a Happy New Beatles! 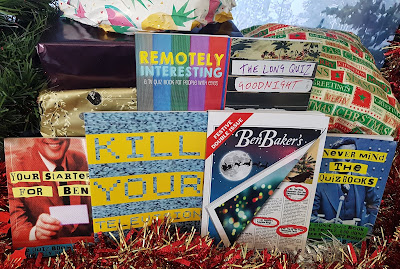 For much more like this, pick up a copy of "Festive Double Issue: Forty Years Of Christmas TV" available in print here: https://benbaker.ecwid.com/Ben-Bakers-Festive-Double-Issue-Forty-Years-Of-Christmas-TV-p95383976