A Christmas Day In The Life: Part Two

In my book, “Festive Double Issue: Forty Years of Christmas TV” (available for Kindle right now here!), I cover the two week festive and New Year period with everything from the obvious to the baffling and all the hapless holidaymakers in between. But what would make up my own perfect Christmas Day line-up? Lets slide into the pre and post-dinner miasma together (With apologies to my pal Paul Gannon for the following).... 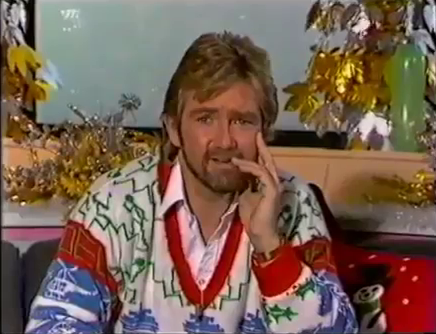 “From the top of London's British Telecom Tower, Noel Edmonds presents a live outside broadcast uniting families and friends throughout the world.”

Noel Edmonds appearing live on Christmas Morning was an event that only happened five times yet still feels like it was always part of the Christmas Days in my youth. With his experience on “Swap Shop” and the “Late Late Breakfast Show” on Saturday nights Noel was already an old hand at helming a technically intricate live broadcast which was fully put to the test with the first show in 1984 featuring lots of outside broadcasts including the much missed Mike Smith out in the “hollycopter”. The team would raise the stakes for 1985’s show which stretched to a behemoth 125 minutes and featured the “world’s first computer draw” and, as seen on blooper shows for decades, “the world’s first in-flight pop performance” with the unfortunate Feargal Sharkey unable to hear anything at 2500ft throughout a mimed performance of “You Little Thief” watched by a helpless and bemused Gary Davies and The Krankies. There was also time for link ups to Africa and the launch of new charity called Comic Relief.

1986 brought a change of title to “Christmas Morning with Noel” to distance it from the “Late, Late Breakfast Show” after its instant cancellation due to the unfortunate death of a member of the public during rehearsals for a stunt five weeks earlier. In retrospect, it’s amazing the special happened at all, no doubt down to the sheer amount of work that would have gone into setting up satellite links around the world including Australia where it was airing live. These efforts resulted in a duet between Cliff Richard and Elton John both on different continents that is as memorable as it sounds. Plus Mike Smith was looking for Santa in Lapland, how can you miss that? The final show from the top of the Tower would happen in 1987 at the slightly earlier time of 9am due to the show going out live in more countries with New Zealand, Singapore and Gibraltar now joining Australia for across the sea family link ups.

With each special previous feeling more and more elaborate the final edition in 1988 was something of a let-down as the show was cut back to just over an hour and even worse came from Studio 3 of BBC TV Centre, a location I’d normally be cock-a-hoop for, but isn’t quite the same as being 625 feet above London. The following year saw Edmonds switch to the pre-recorded “Noel’s Christmas Presents”, a safe but much less fun format that nevertheless became a staple of the Christmas Day schedule for the whole of the nineties with a lengthy revival for Sky later on. Regardless of what we’ve since learned of him being a bit of an oddball who can cure cancer with his mind, Noel was always a cheery, personable frontman of these shows who seemed to be genuinely enjoying himself and it was great to feel the BBC was this exciting alive 'being' watching over the world, offering company, and setting out its stall as the channel to stick with all day. And Noel? He hadn’t quite finished with live television yet as the doors to his Crinkley Bottom prepared to swing open... 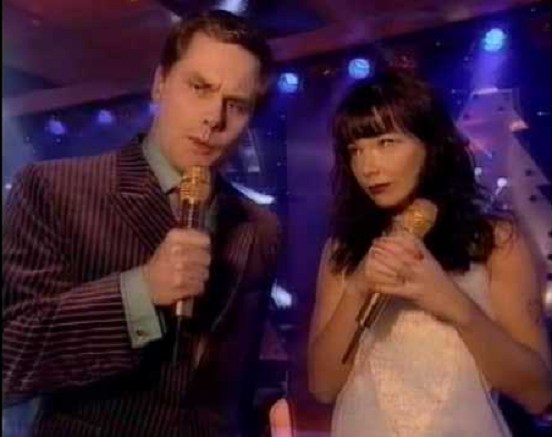 “Bjork and Jack Dee introduce the biggest selling songs of 1995, plus the Christmas Day Number One. Live in the studio are N-Trance, Annie Lennox , Take That, Boyzone, The Outhere Brothers, Simply Red, Robson and Jerome, Pulp and Blur.”

Sticking with the Beeb for another staple, we all have our year zero for pop and, despite a casual interest and collecting the NOW tapes since the turn of the decade, 1995 was the five alarm ring the bell that pushed me fully into a person forever-skint after Monday morning in Our Price. Looking back at that year, people only really focus into Britpop and that was unquestionably a huge moment for me but as this line-up shows it was only a small part of the pop pudding:


Only two songs you could call alternative and they were sandwiching the bloody awful Outhere Brothers - and not even the filthy lyric version we all sniggered about in the playground ("Slip my peter inside your folder") And yet, the older I get, the more I start to get nostalgic for all the stuff I thought was crap when I was a dyed in the wool indie kid. Despite my fantasy scheduling, this edition was pushed back to 12:55pm for a "Only Fools and Horses" repeat but it'll always be hugely important to me as a record of the year I found my voice. Although Robson and Jerome can still piss right off.

Because we all need a piss at some point. 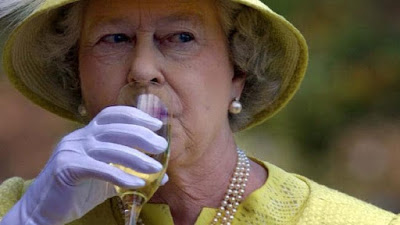 Practically perfect in every way, I could've gone for a lot of great Christmas Day premieres (I so very nearly went with "Back to the Future Part II" because I love it and I dont care) almost all of which was placed post-Maj but for me "Mary Poppins" is just joyful, full of brilliant songs and best of all, I've seen it so many times that if I do nod off after a big old gob-full of bird meat and potatoes, I can just ease back into the plot when I suddenly awake shouting "WHAT? I DONT KNOW NO SPIDERMAN". As was the case with films from the house of ear-shaped snacks, Mary had cropped up in a lot of "Disney Time" compilations on the Beeb but they wouldn't get the full TV premiere until Christmas Day 1984. Sequel? What sequel? 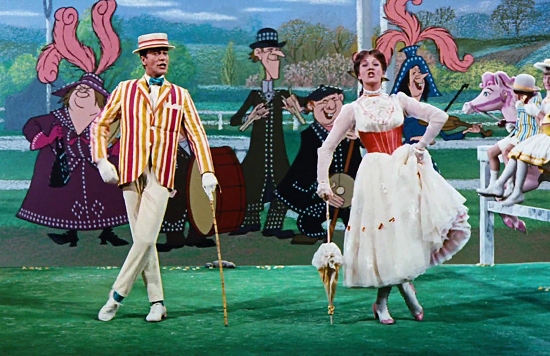 “Join Noel for a Christmas clash of the TV titans.”

Bit of a cheat this one as Noel Edmonds' telly quiz never appeared on the big day but by now I'll need a bit of waking up and a good quiz is perfect for that (I was this close to picking Only Connect...). And so Lil Noely continues his jackbooted and garishly jumpered domination of our late Decembers with the still much-missed TV quiz. Competing in this 1988 edition were “The Cotton Club”, a team comprising of the BBC Managing Director Bill Cotton with Terry Wogan, Tim Rice and TV critic Margaret Forwood and opponents “The Gradey Bunch” aka new Channel 4 chief Michael Grade with Ernie Wise, Susan Reynish from 1986’s winning “Telly Addicts” family plus a seemingly unannounced Leslie Grantham (Grantham’s EastEnders character Dirty Den was at the time in jail before being “killed off” in 1989.) whose appearance seems to throw the usually unflappable Noel for the first few minutes. The regular quiz then continues as normal (The Gradey Bunch win 27-24) until near the end of the show as when some comedy police officers appear on set – again apparently without Noel’s prior knowledge  – to arrest ‘Dirty Den’  Of course everyone – ho ho! - naturally points at Noel who is cuffed and carted off by the fuzz never to be seen again. It's basically Rodney King in bad knitwear.

"Del organises a trip to Margate where he encounters a lost love. But should Rodney be leaving Cassandra?"

Looking back, I realise how much my dial was clearly always set to the Beeb on the big day but I was never really into ITV's mainstream comedies and whilst its been shown more than the testcard and my Dad's operation scar now, "Only Fools and Horses" remains a truly magnificent piece of work. This 1989 special is perhaps my favourite as its the first I can really remember sitting with my family and all laughing at, which was a rare thing in itself. Originally scheduled after the always-rotten "Bread", 20 million British people watched this go out the first time and it makes me a bit sad there's no equivalent in 2018. That said, the following year's Christmas day special “Rodney Come Home” might be one of the most bleak programmes ever broadcast on Jesus' birthday with a 75 minute exploration of Rodney’s failing marriage. LAUGHS!


For much more like this, pick up a copy of "Festive Double Issue: Forty Years Of Christmas TV" available in print here: https://benbaker.ecwid.com/Ben-Bakers-Festive-Double-Issue-Forty-Years-Of-Christmas-TV-p95383976